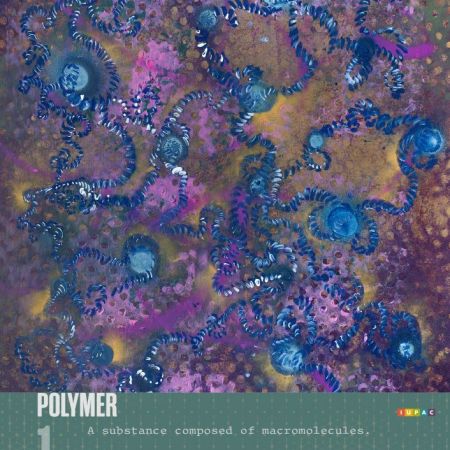 It aims on combining the two traditionally related worlds of Science and Arts, in order to introduce the spectator to the exact and often abstract language of chemical terminology.
Through their joint efforts, the chemist Jan Merna, painter Jan Pražan and graphic designer Luděk Joska are endeavouring to introduce basic terms of Polymer Science to the broader chemical community on the 100th anniversary of German chemist Hermann Staudinger’s ground-breaking concept of polymers structure, published in 1920. Staudinger’s main idea lies in the understanding of the chemical structure essence of classical polymers. This is based on macromolecules: giant molecules that form the majority of synthetic plastic and rubber, which stands behind the quality, safety and sustainability of our daily lives, as well as polymers made by Nature to create our bodies and store the genetic code of life form known on planet Earth, the macromolecules of proteins, cellulose and nucleic acids. Staudinger's concept was on fight in chemists community for the whole decade but was finally accepted and appreciated by awarding Staudinger 1/1 Nobel Price in chemistry for 1953.

The authors would like those who are initially attracted by the Arts to challenge themselves to understand the selected terms of primary importance to Polymer Science and to differentiate between closely related terms (e.g. macromolecule vs. polymer). The original documents, which contain precise definitions created by members of the Subcommittee on Polymer Terminology within the IUPAC Polymer Division, are freely accessible from IUPAC web page. Therefore, those with a deeper interest in macromolecules can understand the terms in detail, then perhaps come back to the paintings and see to what extent the artworks illustrate reality and to which they are the artistic license. We hope you enjoy the exhibition and we appreciate your devoted efforts to better understand the languages of Science and Arts.

On-line preview of the exhibition

The Exhibition is  on display at UCT Prague (Technická street 5, near the new glass bridge).

SciArt was temporarily on display in gallery Makráč of IMC Prague (January 9 -22,2023). 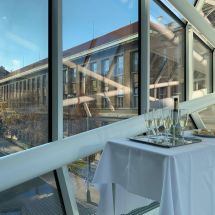